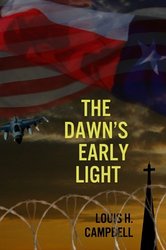 What if the Federal Government was immoral? What if the liberal majority in the government developed and unleashed an unmasked agenda against any and all conservative positions, and in response to a massive peaceful protest against abortion clinics around the country, the government countered by taking into custody all protesters. Women and men were segregated and sent to re-education centers that were former missile sites no longer as part of our nation's defense. What if Iran fired a missile at Israel setting off an international incident of terrifying possibilities? With a massive military call-up through the War Powers Act by the commander-in-chief, and the downward spiraling of domestic conditions related to the over one million people detained in the re-education centers, the politicians have an epiphany - release federal prisoners on an early release program and hire them to guard the re-education centers. The outcome produces the scenario that provokes the State of Texas to secede and re-establish the Republic of Texas. With a vertical split in the U.S. Military, conservative elements align with the new Republic and a precision strike on the re-education centers liberates the personnel. This scenario produces the ultimate conditions for a second American Civil War. Of course, it could never happen here - could it?

Books by the Author:

A Doll's House: An adaptation of Henrick Ibsen's work

Echo of Silence (The Silence Trilogy), The

Fearfully and Wonderfully Made: Biomechanics for the Performer

Memoirs on Mime for All Time

Mime and Pantomime in the Twentieth Century

Moth to the Flame, The

No One Who Cares

Peregrina and Her Beloved

Redemption of Dr. Faust, The

Righting of the Augustus Marie, The

Secret Love of Nell Gwyn, The

Shadows After the Rain

Symphony of Silence (The Silence Trilogy), The

Tapestry of Pas De Deux, The

Wind of Destiny (Captain of the Ship)