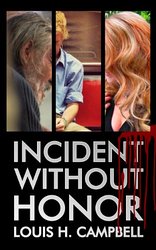 A runaway teen-ager, the widow of a Houston police officer, an old Greek seaman who was a member of the EAS ELAM Nazi resistance - an impossible encounter with astonishing consequences... Political ambitions, white slavery, pornography and drug cartels, all collide in a peculiar Incident Without Honor that remarkably works out to be a healing event reconciling three people from multiple generations, dissimilar cultures and different backgrounds. This compelling tale asks why things are so out of joint, while seeing victims being ignored and immorality running rampant. Except for one man with deep pain from an event that happened decades before, whose moral fiber coerced him to engage and the consequences were extraordinary. One woman who lost her husband and miscarried their only baby the result of a collision with a drunk, uninsured driver. The drunk survived to be released and re-arrested for DWI again. The young teenager ran away from an abusive step-father, only to have her life deteriorate, victimized and exploited with impunity at the hands of employers, and even the shadowy world of white slavery and drug lords. The circumstances of these three victims smash together in a resounding case of a sluggish law enforcement being dictated by a politically aspiring district of attorney. A serious read for those who are frustrated by the moral decay that is progressively imposing on today's world.