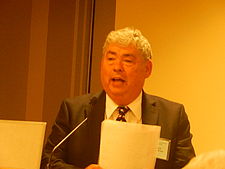 John William O'Neal, known as Bill O'Neal (born April 8, 1942), is an American author who has written forty-two books and more than three hundred articles and book reviews on the American West, including gunfighters, lawmen, and ghost towns; Country music, with emphasis on Texas artists; baseball, such as his study of the Texas League, and children's books, including one on the first Thanksgiving held in Texas.

In 2003, O'Neal retired as a history professor at Panola College, a community college in Carthage, the seat of Panola County in East Texas, located southwest of Shreveport, Louisiana. However, he continues to teach at Panola College periodically and maintains his prolific writing career. A member of the Western Writers of America, he has appeared in television documentaries on Turner Network Television, The History Channel, the British Broadcasting Corporation, the Discovery Channel, Turner Broadcasting System, and the Arts and Entertainment Channel.

O'Neal was born in Corsicana, the seat of Navarro County in east central Texas to William Causby "Bud" O'Neal (1915–1991), a 1939 B.S. graduate of Texas A&M University, and the former Jessie Standard (1918–2002), originally from Lampasas, Texas. O'Neal's maternal great-grandfather drove cattle on the Chisholm Trail; his grandmother, Janie Lucile Standard, came to Texas in 1881 in a covered wagon.[2] Bud and Jessie married on April 9, 1940, and owned a farm retail store in Corsicana. O'Neal has a younger sister, Judy O'Neal Smith (born March 20, 1944), and a brother, Michael Ross "Mike" O'Neal (born June 25, 1952) of Carrollton near Dallas.[3]

In 1960, O'Neal graduated from Corsicana High School. He thereafter enrolled at, first, Navarro College in Corsicana and then Texas A&M University-Commerce, then known as East Texas State University in Commerce, a city in Hunt County. He received his Bachelor's and Master's degrees from A&M-Commerce in 1964 and 1969, respectively. O'Neal served as athletic director and head football coach at Anna High School (1967–1968) and at Waskom High School (1968–1970). He first married the former Kathryn Berry of Dallas. After their divorce, O'Neal married Faye Gipson of Garrison. Faye remarried after their divorce and is now Faye G. Frasier of Corpus Christi. Bill and Faye have four daughters: Lynn O. Martinez (born 1972 and married to Rudy Martinez) of Mansfield, Texas, in the Dallas-Fort Worth Metroplex; Lynn's twin sister, Dr. Shellie O'Neal, (born 1972), a theatre professor at Navarro College; Dr. Berri O'Neal, (born 1975 and married to Drew Gormley) of Irving, Texas, Executive Director, Universities Center at Dallas (www.ucddowntown.org) and adjunct professor, Texas A&M University-Commerce, and Causby Lea Henderson (born 1980 and married to Dusty Lee Henderson) of Allen, located north of Dallas.[4] O'Neal's third wife is the former Karon Ashby (born December 23, 1960), the head of the Panola College mathematics department.[5]

In 1968-1969, O'Neal taught as a graduate assistant in the History Department at East Texas State University in Commerce, Texas. In 1970, he became a full-time faculty member at Panola College, a position that he held for thirty-three years. During his teaching career, O'Neal often dressed in the clothing which might have been worn by various historical characters. He attempted to convince students of the value of history in their daily lives and the unique information available through historical research. He also created a "Traveling Texas" history course.[6] Panola College was founded in 1947 to offer educational opportunities, primarily, to returning World War II personnel. In 1973, O'Neal wrote Panola Junior College: The First Twenty-Five Years. He did an updated version Panola College, 1947-1997 for the occasion of the fiftieth anniversary of the institution.[7]

In addition to his books, many of which have gained popularity beyond historical circles, O'Neal has written hundreds of scholarly articles and book reviews. He lectures before historical associations and related public gatherings. From 1991-1992, he was president of the Nacogdoches-based East Texas Historical Association. On April 5, 2008, O'Neal addressed the West Texas Historical Association annual meeting at West Texas A&M University in Canyon with a well-received lecture on how Texans, such as Gene Autry, Jim Reeves, Tex Ritter, and Bob Wills, have numerically dominated the field of Country music. Moreover, the state has produced artists in other fields of music too: Mary Martin, Janis Joplin, Buddy Holly, and Van Cliburn.[8]

He addressed the WTHA again in 2010, with a report on the depiction of Texas Rangers in film and on television. He found that nearly all western actors except for Randolph Scott played a Texas Ranger character at least once in his acting career.[9] In that presentation, O'Neal noted that the Sons of the Pioneers appeared in 101 films, some with Texas Rangers characters. The character "Lassiter" in Zane Grey's Riders of the Purple Sage is a former Ranger; so is Woodrow Call of Larry McMurtry's Lonesome Dove. John Wayne appeared as a current or former Ranger in three films, The Searchers, The Comancheros, and True Grit, with Glen Campbell in the role of the Ranger from Waco.[9] O'Neal is the current WTHA president for 2014-2015, having been vice president of the organization from 2013-2014.

O'Neal is a member of the Panola County Chamber of Commerce and serves on the executive board of the Texas Country Music Hall of Fame, whose inductees include Reeves and Ritter, the latter the subject of an O'Neal book.

O'Neal has also been active as a part-time radio personality on KGAS-AM and KGAS-FM in Carthage for more than three decades.[10] His interest in radio began with the popular songs of the 1950s and 1960s.

In 1973, O'Neal received the first annual "Excellent Teacher" award at Panola College. In 1987, he was named "Alumnus of the Year" by both Navarro College and Texas A&M University-Commerce. He was "Panola County Citizen of the Year" in 1988. In 2000, he was awarded Minnie Stevens Piper Professorship, and he remains the only Panola College faculty member to ever receive a Piper Professorship.[6]

O'Neal has been cited for his "meticulous research" by the Western Historical Quarterly, published by Utah State University at Logan.[11]

In 2007, he was named the "Best Living Non-Fiction Writer" by True West Magazine.[citation needed]

O'Neal is the Texas state historian, a position to which he was appointed in 2012 by Governor Rick Perry. He spoke at a public forum on March 24, 2013, at the Bob Bullock Texas History Museum in Austin on the topic, "The Leadership Roles of Sam Houston."[12]

On August 10, 2013, O'Neal addressed the summer advanced degree commencement at his alma mater, Texas A&M at Commerce; university president Dr. Dan Jones presented O'Neal with an honorary doctor of letters degree. The Bill O'Neal Hall, a new dormitory at Panola College, is named in his honor.[13]

From publishers web site ArcadiaPublishing.com, Wikipidia and Amazon.com as of December 22, 2016