Passion of Dellie O'Barr, The 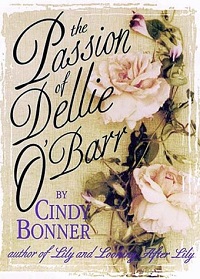 Everybody in McDade has always thought of Dellie O'Barr as "the good little sister"--until she falls urgently in love with Populist rabble-rouser Andrew Ashland. For his love, Dellie tosses aside her own status--a privileged life and perfect reputation--burns down a local store that denies Populists credit and leaves her rich husband to chase after her lover when he disappears from town. Dellie becomes a martyr and model to the national suffragist movement. Through it all, her husband sticks by her. As much about married love as forbidden love, THE PASSION OF DELLIE O'BARR is the story of a singular woman's life and of the lives of the two men she chooses as lovers. "Captivating."--Booklist; "Crisp prose, absorbing historical detail and appealing characters."--Publishers Weekly; "Cindy Bonner is a national treasure . . . What's so remarkable about Bonner's writing is that not only can she spin a mesmerizing yarn, but she can also weave in the small details of a century ago in a way that makes the era seem human and real."--The Virginian-Pilot.

Following the acclaimed Lily and its sequel, Looking After Lily, Bonner's third novel is engagingly narrated by Lily's younger sister, Dellie, a 20-year-old housewife who becomes an adulterer, an arsonist and, later, a hero of the women's suffrage movement. Like its predecessors, this story is set in the real-life town of McDade, Tex., and is loosely based on a real event-the burning, in 1896, of the town's largest business. After a "satisfactory" two-year marriage to wealthy rancher Daniel O'Barr, 32, Dellie finds herself attracted to a poor tenant farmer, Andy Ashland. A champion of Populist causes like a woman's right to vote, Andy cares for his two young children while his wife is an insane asylum. When Daniel goes away on business, Dellie attends Populist meetings, writes for the party newspaper and begins an affair with Andy. Yet, after promising to run away with her, the tenant farmer mysteriously disappears with his children. Angry and disillusioned, Dellie sets fire to a store whose owner has exploited the area's farmers, then flees to Louisiana to look for her lover. Eventually, she must decide whether to remain a fugitive or to return to McDade to confess her crime to her husband-and to the sheriff. The crisp prose, absorbing historical detail and appealing characters (including Lily, who makes a welcome cameo at novel's end) will please admirers of the author's McDade Cycle series.
Copyright 1996 Reed Business Information, Inc.

Bonner's first two novels, Lily (Algonquin, 1992) and Looking After Lily (Algonquin, 1994), set in the small town of McDade, Texas, in the late 1880s, told the story of the two oldest De Lony children, Lily and Dane. This third book focuses on younger sister Dellie. Married for two years to Daniel O'Barr, lawyer and rancher, Dellie, at 20, discovers a tempting alternative to her staid life when she becomes involved with Andy Ashland, a handsome, charismatic political organizer. Carried away by her love for Andy, Dellie commits a terrible crime that will change her life forever. Although many readers may find Daniel simply too good to be true and the last third of the novel somewhat rushed, this is a solid, old-fashioned historical romance featuring a sympathetic, three-dimensional heroine who learns, as her sister Lily did, that every action has its consequences. Although it isn't necessary to have read the first two books to enjoy this one, readers will want to catch up on all the books in the McDade cycle. Recommended for public libraries.?Nancy Pearl, Washington Center for the Book, Seattle
Copyright 1996 Reed Business Information, Inc.

In the third installment of her captivating cycle of historical novels set in McDade, Texas, Bonner shifts her focus from the heroine of the first two books, Lily (1992) and Looking After Lily (1994), to Dellie, Lily's younger sister. Dellie, unlike passionate Lily, has been a very proper young lady, actually too wellbehaved for her own good. Fortune has brought her a rich, trustworthy husband, but not the sort of fiery love she craves or children. When her tyrannical father dies, Dellie's facade crumbles, and she gives full rein to her infatuation with a tenant farmer named Andy Ashland. Charismatic, sexy, hot-tempered Andy is deeply involved in the Populist movement, and Dellie, sheltered and naive, is almost as excited by his radical beliefs as she is by his magnetic presence. As Bonner tracks the tragic outcome of their ill-advised affair, she incorporates just the right amount of background information about the Populists and the early suffragists, thus transforming impersonal history into personal drama. Readers may respond with deep pleasure, once again, to her impeccable style, keen wit, and psychological insight. Donna Seaman

The heroine of this third and decreasingly engaging installment in the McDade Cycle (Lily, 1992; Looking for Lily, not reviewed) is a young woman who gets into trouble in small-town Texas of the 1890's as she follows her heart rather than her head. As the story begins, Dellie, Lily's younger sister, has been married for two years to Daniel O'Barr, a local farmer and lawyer. Daniel is kind and generous but often absent, leaving Dellie restless and bored. At a picnic celebrating a reunion of local Confederate veterans, she meets handsome Andy Ashland, her father's tenant farmer, who delivers a fiery speech in favor of Populism. Four days later, her father, dying of cancer, commits suicide. Dellie, who had married Daniel in part to escape Papa's harsh ways, finds it difficult to grieve. Increasingly attracted to Andy, she starts attending local Populist meetings to hear him speak, begins writing for the Populist paper, and (when her husband is out of town) she spends time with Andy and his two children. Andy is married, but his wife is hospitalized in an Austin asylum; he is also heavily in debt, especially to local merchant Louis Bassist, whom he accuses of usury. Soon deeply smitten, Dellie follows Andy to Austin for a tryst and decides to divorce Daniel. When Andy leaves town, she impulsively sets Bassist's store on fire and flees to Louisiana, hoping to meet up with her lover there. When he fails to come, she returns to McDade to give herself up. Dellie and Daniel reconcile. She's tried and imprisoned for arson, finding some consolation in becoming an ardent Suffragist. In always nicely evoked period settings, Dellie tries hard to be strong, sexy, and politically progressive, but she never quite comes alive either as a ``new woman'' or a heartwrenching romantic. -- Copyright ©1996, Kirkus Associates, LP. All rights reserved.

Books by the Author:

Passion of Dellie O'Barr, The