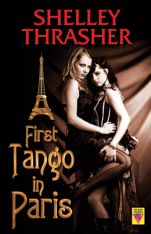 It's summer in Paris, 1972. Frenchwoman Eva Laroche wants to pass her bar exams and get a good job as a trial attorney, but she's working as a tour guide to pay off debts. American beauty Brigitte Green wants to find a new home in Paris and forget her past that haunts her with vivid waking dreams. Though the beauty of Paris and the magic of its rich feminist culture draw them ever closer, a secret from Brigitte's past life threatens to destroy their chance for a future together. Can their fragile love flourish in the City of Light?

History of the Book:

I first visited Paris in the summer of 1972 and fell in love with the city. In later years I visited most of the sites mentioned below, but in this novel I tried to recapture the feel of Paris in 1972, the year Last Tango in Paris came out and a formative date in the history of feminism.

I am trying to make a feminist statement in this novel by creating a main character, Brigitte Green, who, though driven into the life of a high-class call girl as a young woman in New Orleans, finds the courage to leave her past behind and look for love in Paris. Her journey differs radically from that of the Marlon Brando character in Last Tango in Paris, who becomes morally bankrupt and loses his life.

I also attempt to counter the negative and/or romanticized view of France and its capital that many Americans have. In order to cut through such preconceptions, I have created a young Frenchwoman, Eva Laroche, as my other main character. Through her, I can show both her everyday concerns and her feelings about France and the U.S.

Although Brigitte visits the Eiffel Tower, stays in the luxurious George V hotel, rides down the Champs Elysees, and listens to jazz in a swanky nightclub, these famous places are merely a backdrop and can’t make her stop thinking about the recent death of her best friend and her resulting loneliness.

And though Eva, working in a service occupation (tour guide) with her supportive aunt in Paris, introduces American and British tourists to such famous spots as Versailles, the Tuileries, the Conciergerie, and Pere Lachaise, she views herself as a type of babysitter for wealthy, demanding clients.

Even while Brigitte and Eva later tango together in a famous lesbian bar, cruise the Seine at night, spend the day at a huge flea market, and visit the Rodin Museum and the Cluny Museum, the specters of Brigitte’s sordid past and Eva’s dysfunctional family haunt them.

Both Brigitte and Eva grow and change, helped by the positive influences Paris provides them.

Above was provided by the author.