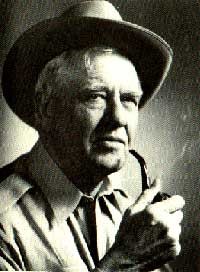 DOBIE, JAMES FRANK (1888–1964). J. Frank Dobie, folklorist, was born on a ranch in Live Oak County, Texas, on September 26, 1888, the eldest of six children of Richard J. and Ella (Byler) Dobie. His ranching heritage became an early influence on his character and personality. His fundamentalist father read the Bible to Frank and the other five children, and his mother read them Ivanhoe and introduced them to The Scottish Chiefs, Pilgrim's Progress, andSwiss Family Robinson. He left the ranch when he was sixteen and moved to Alice, where he lived with his Dubose grandparents and finished high school. In 1906 he enrolled in Southwestern University in Georgetown, where he met Bertha McKee, whom he married in 1916, and Professor Albert Shipp Pegues, his English teacher, who introduced him to English poetry, particularly the Romantics, and encouraged him as a writer. Dobie's education as a teacher and writer continued after graduation in 1910. He worked two summers as a reporter, first for the San Antonio Express and then the Galveston Tribune. He got his first teaching job in 1910 in Alpine, where he was also the principal, play director, and editor of the school paper. He returned to Georgetown in 1911 and taught in the Southwestern University preparatory school until 1913, when he went to Columbia to work on his master's degree. With his new M.A. he joined the University of Texas faculty in 1914. At this time he also joined the Texas Folklore Society. Dobie left the university in 1917 and served for two years in the field artillery in World War I. His outfit was sent overseas right at the war's end, and he returned to be discharged in 1919. In 1919 he published his first articles. He resigned his position at the university in 1920 to manage his uncle Jim Dobie's ranch. During this year on the Rancho de Los Olmos with the vaqueros and the stock and the land that had been part of his formation, Dobie discovered his calling-to transmute all the richness of this life and land and culture into literature. The Texas Folklore Society was the main avenue for his new mission, and the University of Texas library with all its Texas resources was his vehicle.

Dobie returned to Austin and the university in 1921. The Texas Folklore Society had been formed in 1909 by Leonidas W. Payne and others, but had recessed during the war years. On April 1, 1922, Dobie became secretary of the society. He immediately began a publication program. Legends of Texas (1924) carried the seeds of many of his later publications. Dobie served as the society's secretary-editor for twenty-one years and built the society into a permanent professional organization. When the university would not promote him without a Ph.D., Dobie accepted the chairmanship of the English department at Oklahoma A&M, where he stayed from 1923 to 1925. During these two years he began writing for the Country Gentleman. With considerable help from his friends on the UT campus, he was able to return in 1925 with a token promotion. He began writing articles on Texas history, culture, and folklore for magazines and periodicals and soon started to work on his first book, A Vaquero of the Brush Country. Dobie's purpose in life from the time of his return to the university in 1921 was to show the people of Texas and the Southwest the richness of their culture and their traditions, particularly in their legends. John A. Lomax, another founder of the Texas Folklore Society, had done this with his collecting and publishing cowboy songs; Dobie intended to do this with the tales of old-time Texas and through the publications of the society and his own writing.

His Vaquero of the Brush Country, published in 1929, established him as a spokesman of Texas and southwestern culture. It was based on John Young the Vaquero's autobiographical notes and articulated the struggle of the individual against social forces, in this case the battle of the open-range vaquero against barbed wire. Two years later Dobie published Coronado's Children (1931), the tales of those free spirits who abandoned society in the search for gold, lost mines, and various other grails. It won the Literary Guild Award for 1931 and, combined with his continuing success as a popular writer in Country Gentleman, made Dobie a nationally known literary figure. He was also promoted in 1933 to the rank of full professor, the first Texan non-Ph.D. to be so honored at the university. In 1942 he published the Guide to Life and Literature of the Southwest, an annotated reading list. It was published again in 1952. As head of the Texas Folklore Society and author of On the Open Range (1931), Tales of the Mustang (1936), The Flavor of Texas (1936), Apache Gold and Yaqui Silver (1939), and Tongues of the Monte (1947), Dobie was the state's leading spokesman and literary and cultural figure during the Texas Centennial decade, the 1930s. His first period of writing ended with the publication of The Longhorns in 1941.

He spent World War II teaching American literature in Cambridge. After the war he returned to Europe to teach in England, Germany, and Austria. He said of his Cambridge experience in A Texan in England that it gave him a broader perspective, that it was his beginning of his acceptance of civilization, an enlightened civilization free of social and political rigidities and with full respect for individuality. In Texas the University of Texas regents, critical of the university's liberal professors, had fired President Homer P. Rainey in November 1944. Dobie, a liberal Democrat, was outraged and vociferous, and Governor <a href="https://tshaonl